Posted on September 26, 2020 by Raimundo Oliveira

22 Sep 2020 –  Jair Messias Bolsonaro, President of the Federative Republic of Brazil, addresses the general debate of the 75th Session of the General Assembly of the UN (New York, 22 – 29 September 2020).

In a video message, Brazilian President Jair Bolsonaro told the General Assembly’s General Debate that segments of the Brazilian media have “politicized” the COVID-19 pandemic “by spreading panic among the population.”

The president also told that there is a brutal international desinformation campaign about Amazon and Wetlands amongst other issues.

Posted on September 27, 2019 by Raimundo Oliveira

Link to the video: https://media.un.org/en/asset/k1h/k1hf8sfhw6

Mr. President of the General Assembly, Tijjani Muhammad-Bande,
Mr. Secretary-General of the UN, António Guterres,
Heads of State, of Government and of Delegation,
Ladies and gentlemen,

I present to you a new Brazil, resurgent after being on the brink of socialism.

A Brazil being rebuilt on the aspirations and ideals of its people.

In my government, Brazil has been working to reconquer the world’s trust, reducing unemployment, violence, and risk to business through de-bureaucratization, de-regulation, and especially through example.

My country has been extremely close to socialism, which has put us in a situation of generalized corruption, grave economic recession, high criminality rates, and uninterrupted attacks to the family and religious values which make up our traditions.

In 2013, an agreement between the Workers’ Party government and the Cuban dictatorship brought to Brazil ten thousand doctors with no professional accreditation. They were prevented from bringing spouses and children, had 75% of their salaries confiscated by the regime, and were prevented from enjoying fundamental rights such as coming and going.

END_OF_DOCUMENT_TOKEN_TO_BE_REPLACED

Posted on September 27, 2019 by Raimundo Oliveira 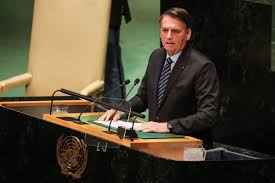 Mr. President of the General Assembly, Tijjani Muhammad-Bande,
Mr. Secretary-General of the UN, António Guterres,
Heads of State, of Government and of Delegation,
Ladies and gentlemen,

I present to you a new Brazil, resurgent after being on the brink of socialism.

A Brazil being rebuilt on the aspirations and ideals of its people.

In my government, Brazil has been working to reconquer the world’s trust, reducing unemployment, violence, and risk to business through de-bureaucratization, de-regulation, and especially through example.

My country has been extremely close to socialism, which has put us in a situation of generalized corruption, grave economic recession, high criminality rates, and uninterrupted attacks to the family and religious values which make up our traditions. END_OF_DOCUMENT_TOKEN_TO_BE_REPLACED

Posted on January 15, 2019 by Raimundo Oliveira

Nowadays we see in the US an intense and persistent dispute between democrat and republican parties about how to deal with immigration, which is not just an humanitarian problem and a way to renew and to promote sustainable development according to United Nations. It is much more than it. The immigration has been a difficult issue, that has been used not only by organized crime to get money, but also by corrupt foreign governments unable to work to solve their internal problems. Hence, the solution is easy, these governments just push people they do not want out of the country. These desperate people go to developed countries, which are in turn, quickly pressed by human rights organizations, media and political parties, internally and externally, to accept these people. Nobody talks to the authorities of the countries that are exporting people, not even the media press them to explain what is going on and what they are doing to solve the issue. END_OF_DOCUMENT_TOKEN_TO_BE_REPLACED

How to implement socialism in Brazil? Strategy and tactics from workers’ party and its communists allies

Posted on September 7, 2016 by Raimundo Oliveira

The Brazilian democracy holds a dangerous and impressive political system. It permits that political parties which support totalitarian ideologies take place at the political life in the country as if they were democratic parties. The greatest expression of this reality is the revelation by the Federal Justice all details about the dirty corruption practiced by workers’ party members to steal money for them and for the party from own-state controlled companies. Thus, they got enough money to bribe deputies from other parties to approve projects of their interest. The goal was to change the laws to support the implementation of a socialist state. Hence, the Brazilian democracy have kept the seeds of its own destruction, insofar it allows that criminal and subversive organizations perform their activities freely in a constant flirt with the communist threat. END_OF_DOCUMENT_TOKEN_TO_BE_REPLACED

The Soviet Union dissolution was the greatest geopolitical disaster of the twentieth century. This dramatic statement was attributed to Vladimir Putin, the current Russian president and former officer of the KGB (Committee for State Security), the old Soviet Secret Service. It is not an accident that he has been working aggressively to recover influence, prestige and power of Russia. For those who always used to be in power and in control, it must not have been easy to watch so close the Soviet Union fragmentation. His vigorous actions in the international political arena, ruling with the “iron hand”, especially in regions that were portion of the former Soviet state, repressing separatist movements in the Caucasus region mainly in Chechnya, as well as providing military support for Russian separatist movements in Eastern Ukraine, clearly reveals his determination to rescue for the country at least part of the former influence and power that held Russia during Soviet era. His actions can also be seen as a reaction against the risk of political, cultural, economic and military western siege, which has been expressed by the NATO (North Atlantic Treaty Organization) advance to the East, to the extent that absorbs in its organization all the former communist states which were members of Warsaw Pact, the former military organization headed by the previous Soviet Union. END_OF_DOCUMENT_TOKEN_TO_BE_REPLACED

Brazil: It is time to take clever decisions

Posted on April 6, 2013 by Raimundo Oliveira

The Brazil’s GDP (gross domestic product) was just 0.9% in 2012. This poor result has rekindled the debate about the Brazilian government ability to ensure the economic development. After a considerable period of growth in the last decade with 3.6% average annual rate, according to the IBGE (Brazilian Institute of Geographic and Statistic), Brazil has been experiencing difficulties in maintaining this level which is well below of the main BRICS (Brazil, Russia, China, India and South Africa) that grew at annual average rates, in the last decade, at levels much better than Brazil: China 10.3% – India 7.1% – Russia 5.3%. Only South Africa had a similar Brazilian average growth of only 3.6%. In order to boost its economy in the past decade, Brazil END_OF_DOCUMENT_TOKEN_TO_BE_REPLACED

On September 2012, it was possible to watch several demonstrations of nationalist behavior in China and Taiwan to protest against Japanese control over a small and remote group of islands in the East China Sea. This archipelago is comprised by eight islands, very small and with about 7 square kilometers. They are called by the Japanese as Senkaku Islands and by the Chinese as Diaoyu Islands. The archipelago is claimed by China and Taiwan based on Ming Dynasty’s historical documents from 1556. 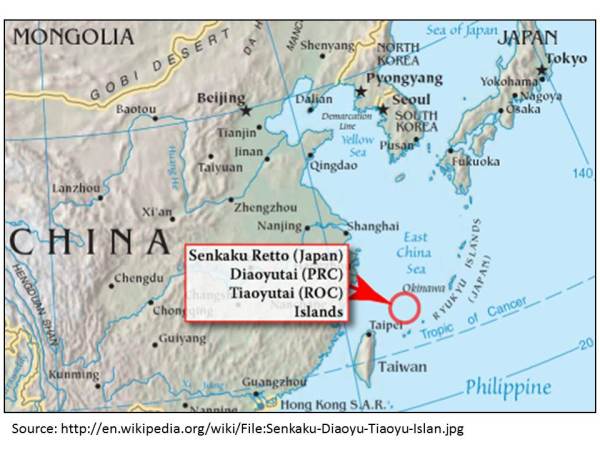 END_OF_DOCUMENT_TOKEN_TO_BE_REPLACED

The recent history of Asia presents two crucial events which were observed immediately after World War II. One of them is the People’s Republic of China foundation on October 1949, as a result of a terrible civil war, in which the Chinese Communists defeated the Kuomintang forces, forcing the retreat of the Chinese Nationalist army to the Taiwan Island. The other event, no less important, happened two years earlier, on August 1947, when the British Empire, weakened by the Second World War, agrees to grant independence to its largest colony, India. Then two countries were set forth, Pakistan and India, the first one designed to meet the Muslim community demands, and thus separated the two main religious communities which had a long history of disputes and serious difficulties of coexistence. Despite the huge human cost to make this END_OF_DOCUMENT_TOKEN_TO_BE_REPLACED

Chinese Development and its Growth – An overview

Posted on December 7, 2012 by Raimundo Oliveira

Recently, during China’s 18th Party Congress, Chinese government defined the leadership of the Communist Party that will govern the country for the next 10 years. There was nothing new in the choice of Xi Jinping to succeed Hu Jintao in the president position. In fact political analysts had foreseen who would be the next president. The delegates from different regions of China, all of them from the Communist Party, just met to ratify the leadership decision. The Chinese political system does not use the popular vote. Its entire leadership is indicated by leaders who are wielding power. The Chinese government does not intend to make any kind of political change to enable popular participation. They do not even want to consider it. This END_OF_DOCUMENT_TOKEN_TO_BE_REPLACED